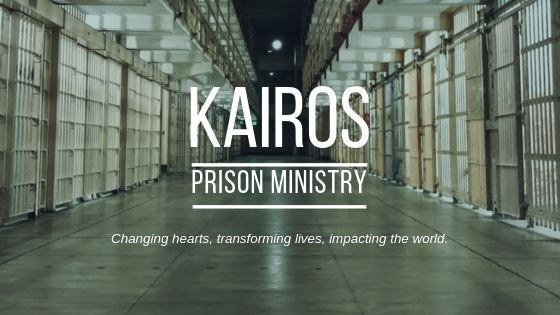 My name is Bernie DeVault and, as some of you know, I am involved with the Kairos Prison Ministry at the Sterling Correctional Facility (SCF) in Northeast Colorado. I have been asked to inform you folks about this place and what goes on there.

The Sterling facility, which houses approximately 2,500 men, is the largest single facility of the Colorado Department of Corrections, is surrounded by two razor-edged fences with a very high voltage between the two fences. SCF is divided into four divisions, or units. The first is the Sag Unit, which houses those men who don’t do well with the rest of the population. These men are always locked up 23 of the 24 hours a day. The second unit is called Protective Custody. The other two units are the West Side Maximum Security and the East Side Medium Security.

Every second and fourth Saturday of each month, we have a reunion with the men who have gone through a four-day Kairos Ministry weekend, as well as with those who have not gone through a weekend.

An inmate is chosen and designated to speak on a topic. Today’s topic was “Are You a Steering wheel, a Tire, or a Spare Tire In Your Walk with Christ?” We then broke down into a group of about four or five inmates with two or three volunteers.

In my group we had three inmates and three volunteers. One of the inmates was new with Christ and wasn’t sure how to pray to God. He had not been at a ministry weekend, but as he comes to these reunions, he is learning. The other two had gone through a weekend and are doing a good job in following Christ. It was brought up that walking with Christ is like driving a car. You have that little mirror that you look at to see what you have left behind, so you can look out that big windshield and see what Christ has in store for you. As one inmate said, even though he has a life sentence, they are teaching him to operate heavy equipment. He said that he is from Los Angeles where they don’t have eight-wheel drive tractors but have plenty of gangs in which he was involved. After all the small groups are done, we come together and share with others about what each group talked about. This was a very good topic to discuss.

I hope you enjoyed this report and, until next time, let the Lord be your Pilot while you are controlling that STEERING WHEEL.