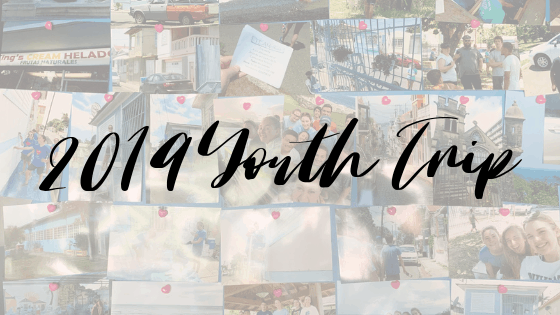 After landing in Puerto Rico, renting two vans, and getting lost luggage straightened out, Emily Farrenkopf, Brant Davis, and their youth group started the almost two-hour ride to Ponce, a town in the southern part of the region. For most of those in the group, this mission trip was their first time outside the mainland.

“The Puerto Ricans are beautiful people,” Emily said. “The community members we met were so welcoming and so kind. Even the people at the airport appreciated us for what we were coming to do.”

As the work week began, the boys replaced the flooring in a home’s bedroom that had completely rotted through. They pulled out old plywood first in a job that was physically demanding, given that the house sat on concrete blocks.

The girls concentrated on a woman’s home of 30 years that was in need of painting. They scraped and cleaned the walls, and then painted, using oil-based paint that holds up best against the weather. It was a slow process that will be completed by the group that arrives after them.

The team packed in some fun during their free time each day, going to beaches, going out for ice cream, snorkeling in a bioluminescent bay, and walking around San Juan on the last day before leaving for home.

During their week there, the teens stayed at the Ebenezer House, a building owned by one of the United Methodist churches in Ponce. When asked if there were certain precautions or certain rules they had to abide by, Emily responded, “Very much so. Safety was a priority. We never left a neighborhood after dark, and never left alone.”

Even though a lot of the places they visited during their trip were not known to be safe, Emily said they never felt endangered. She added that the people who would otherwise be up to no good believed in them and what they were doing there.

Although they felt relatively safe with a roof over their heads, bars on the windows and porches, and a padlocked driveway gate, the group struggled a bit with lacking the comforts of home. The sleeping arrangements were tough, there was no hot water, and cockroaches and a swarm of bees got into the bathroom.

“The hardest part was adjusting to the bathroom situation,” Emily said. “By the time we left, the kids really saw it from a perspective of what they were dealing with, and that they would get to go home to comfort. They never complained.”

Despite the language barrier, the teens formed friendships with the community members. One in particular was a man named Eduardo, who was a member of the Methodist church.

“He joined us for every chapel gathering and was so interested in talking with us,” Emily said. “Our kids really welcomed him into the circle and, in return, he gave us all keychains before we left.”

Another great friendship experience was the party in the park, during which the teens walked around the neighborhood they were working in and invited everyone to enjoy hotdogs and chips.

“There was quite the language barrier,” Emily added, “but we found ways to laugh and connect.”

The entire mission trip was impactful to the teens in that, after witnessing such a different reality, they became more aware of the comforts they enjoyed at home.

Emily wanted to give kudos to the group’s co-leader, Brant Davis, who contributed his own money to pay for everyone’s hotel stay in San Juan the night before departure.

“Thanks to Brant, the kids were able to have a good, hot shower and sleep in good hotel beds before the flight back home,” Emily said.

Photos from the Youth Trip are available for viewing on the Youth board in the Gallery. During the July 28 church service, the teens will be addressing the congregation with their Puerto Rico experiences. Don’t miss it!